Can you make a treasure from your own trash?

I spent the weekend up in Lake Tahoe visiting my friend Stacey
We love to create art together so that's what we did... I had learned how to make a recycled light bulb and plastic thingy into a shrine from Michael deMeng's class, but I hadn't finished mine. Stacey wanted to learn what I had learned so I grabbed my unfinished work and some burnt out bulbs that I had along with a bunch of supplies from the Hannah Grey Design Team package I got last week and headed for the hills... or mountains... whatever!

We had so much fun! We will NEVER look at light bulbs the same... did you have any idea that there were PEOPLE inside those bulbs?
Its true just have a look...

and they'd like the world to KNOW that they LOVE TREES
especially the pewter type that you an get from HannahGrey
See?

and they have stuff to say! 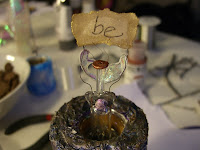 ultimately, they are really their most centered in their bulb sweet bulb 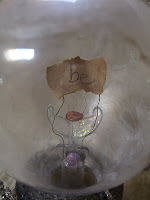 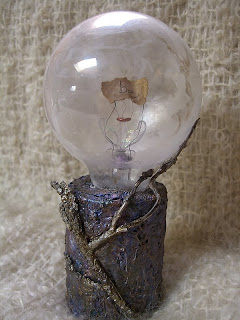 P.S. I really did finish the one that I started in Michael's class... but lame ole blogger won't let me upload any more pictures right now. i'll try again later!
Posted by Unknown at 10:40 AM