This little DUDE is my brother's new puppy! He's super freakin' cute and he's going to be a small dog... he's already 6 months old and he's small enough to carry around, but we won't be carrying this guy... he's a dog, not a baby!

Now, anyone who knows me knows that I would LOVE to get a puppy, but the timing just isn't right for us. So, that' means that I'm freakishly happy about my brother bringing the puppy over... good thing he was busy measuring stuff to bid some work we are trying to get done, otherwise he may have felt ignored!

In other news, I was not totally shirking my duties... I SWEAR!!! In between cute fixes and puppy photo shoots, I have been busy making shrine kits for this weekend's Memory Box class in Danville... 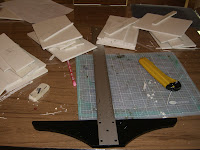 I should be charging $55 for the kit and $15 for the instruction since I did the hard part!!!