If you don't know what Freecycle is do a Google search and inform yourself... Freecycle is NOT to be missed, people!

I have given away kid stuff, we have gotten moving boxes and we have scored some cool toys for Alexia's enjoyment... I even got some Rollerblades that I wished I wouldn't have... ahem... but this may be the score of all scores... check this out! 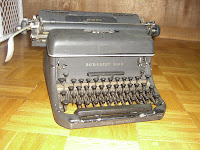 Now, Simon wants to know what in the WORLD I'm going to do with the thing, but right now Remington and I are in the honeymoon phase of our relationship. My first idea is to pull it apart and use the pieces in an assemblaaaaaahge, my second idea is to use the base itself as the base for an assemblaaaaaahge (I'm going to be saying it like that for now... just so you know... the Micheal deMeng classes are next week so I have to practice saying it right ;) BUT Remington is still working! How can I pull this lovely relic apart, I ask you??? Here is where I begin to show my age... when I was telling Lexee where we were going I kept saying "to pick up a typewriter." and she kept asking me where are we going and after about 3 different times of going back and forth I realized... a "typewriter" is the same as "whoozy whichy" to a 4 1/2 year old these days! Once I got the thing in the car I typed out her name and she was thrilled!

So... what will Remington turn into? I have no idea yet, do you?