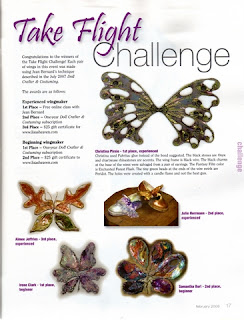 So, there I am, there I am, there I am... I'm sittin' there minding my own business when I get an email from my friend Karen in NYC that says something along the lines of "ummm do you have something published in this new Doll Crafter & Costuming magazine? I mean, its "altered art" and it has something like your name next to these winged baby shoes." My first response was no. I hadn't submitted anything nor had I been notified that I was going to have something published so I didn't think it could be me, but then I thought well, I do have those fab baby shoes of Lexee's that I stuck some wings on... OH! WINGS! THE WING CHALLENGE!!! WOOOH HOOOOO!!! IT MUST BE ME!!!

So, I took a deep breath and coyly emailed the UBER talented Jean Bernard of famous doll maker fame who's Yahoo group I belong to and asked her... "whatever became of that wing challenge we did earlier this year?" Well, she had forgotten all about it - as I had - and then she scanned and emailed the image you see at left! HEY, its real! That's my project that I did for Stacey's benefit this coming Spring! I had used Jean's technique to add to my altered shoe project and when I posted them to the group they all thought I should join in the challenge. I really didn't think I had a chance since it was a doll mag and I didn't use them in a way that would be appealing to doll enthusiasts, but I got an email from the editor and I sent her a picture I took and I never heard anything again.

Well, today I FINALLY was able to put my hands on the actual magazine and I'm so excited to announce that I have had one of my favorite projects published in a national magazine.

Thanks, to Jean Bernard and to Doll Crafter and Costuming!!!
Posted by Unknown at 1:58 PM